Join us as Chef Irwin MacKinnon, Canadian Culinary Federation Chef of the Year, creates a dish that features the best ingredients PEI’s has to offer. 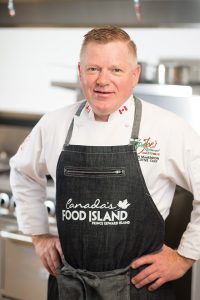 After graduating from The Culinary Institute of Canada, Irwin began his culinary career in Switzerland and Germany, returning home to PEI in the early 1990’s. He became the head chef at Joseph’s Restaurant (later Papa Joe’s), and has worked there with the Jabbour family for more than 27 years.

Irwin has mentored dozens of interns and students from The Culinary Institute of Canada and has helped many up-and-coming chefs find their own culinary voice. He has travelled globally to promote Island seafood and is well known among farmers, producers and artisans as a pioneer of the “use local” movement on PEI. He has also led many PEI-focused initiatives, including Forage and Fall Flavours.

Irwin and Papa Joe’s have been finalists in the Taste our Island Award for the past decade, winning the Award in 2011. Most recently, Irwin was the 2017 winner of Taste our Island People’s Choice Award.

In 2015 and 2016, Irwin was named as the Best of Sea Chic Chef of the Year and placed 3rd in the Garland International Chefs Challenge as part of the PEI Shellfish Festival.

As winner of the 2018 Regional Canada’s Great Kitchen Party competition in Moncton, NB, Irwin travelled to Kelowna, BC where he represented the region of New Brunswick and Prince Edward Island at the 2019 Canadian Culinary Championships.

In February of this year, Irwin was awarded the 2018 Holland College Distinguished Alumni Award.