The Fall Flavours Festival team were in downtown Toronto today to celebrate the festival’s 10th anniversary and announce the 2017 Signature Event and celebrity chef lineup. On hand were celebrity chefs Chuck Hughes, Corbin and David Rocco to help celebrate this announcement.

“With these incredible celebrity chefs and our talented local chefs, guests can enjoy the authentic tastes of Prince Edward Island in some of the most engaging ways at locations you can only imagine,” says John Rowe, Chair of Food Island Partnership, the organizing group for Fall Flavours. “These events on Canada’s Food Island are truly like no other. I encourage people to get their tickets early, as many events sell-out quickly.”

Signature Events for 2017 are:

In addition to the eleven Signature Events, the festival features Culinary Events, Culinary Adventures, special Restaurant Dining and, new this year, Taste of Coastal Communities events. Set in some unexpected seaside venues, these charming experiences will feature the best from the Island’s towns and villages that sit by the sea. Stay tuned as details and events to be announced mid-June.

Tickets are on sale now, with Early Bird Prices (10% off) in effect until August 31st.  Visit www.fallflavours.ca to purchase tickets. AIR MILES has joined as an official ticketing partner with guests able to redeem their AIR MILES Reward Miles online for Signature Event tickets. For more information please visit: www.airmiles.ca

The Fall Flavours Festival is hosted by Canada’s Food Island and is an initiative of the Food Island Partnership. 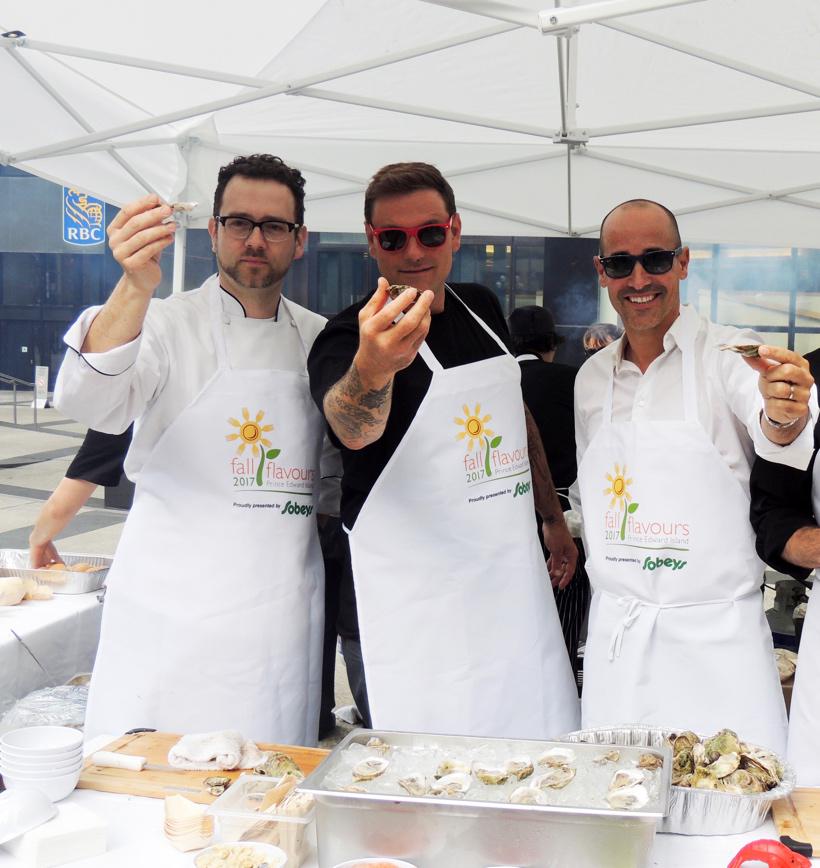 Chef Corbin, Chuck Hughes and David Rocco handing out oysters in downtown Toronto to celebrate the launch of The Fall Flavours Festival taking place on PEI in September.