The Fall Flavours Festival returns to Canada’s Food Island August 31 to September 30, 2018 for a month of unforgettable culinary experiences. Featuring five new guest chefs and more events than ever before, this year’s Festival is set to be the biggest yet. Sobeys is thrilled to return as the Festival’s Title Sponsor and continue its tradition of promoting local products and supporting Island farmers and fishers. The Fall Flavours Festival team announced the 2018 Signature Event, Taste of Coastal Communities and guest chef lineup at the Stratford Sobeys Extra store today. Celebrity Chef Michael Smith was on-hand to help celebrate this year’s exciting line-up.

As well, two new VIP experiences will be added to the Taste of Coastal Communities line up.  An Evening at Red Shores will feature an exclusive five course themed dinner and wine pairing experience at the heart of PEI’s longstanding harness racing tradition.

The Festival will also welcome back popular chef hosts including Lynn Crawford, Mark McEwan, Danny Smiles, Corbin Tomaszeski, Chuck Hughes and PEI’s own Michael Smith for fourteen Signature Events. The full list of Signature Events and Chefs for 2018 are:

Chef Chuck Hughes is also set to host an exclusive Fall Flavours event with some of his best Island friends – chefs and producers that have warmly welcomed him into their kitchens and lives. The event takes place on Sunday, September 23  at the Table Culinary Studio and will feature an extraordinary meal featuring PEI ingredients, artisan breads and cheeses and foraged delicacies.

The festival also features Culinary Events, Culinary Adventures and a special Restaurant Dining Program. Tickets are on sale now with Early Bird prices (10% off) in effect until August 31st.  For tickets and  information, visit www.fallflavours.ca or call 1-866-960-9912. 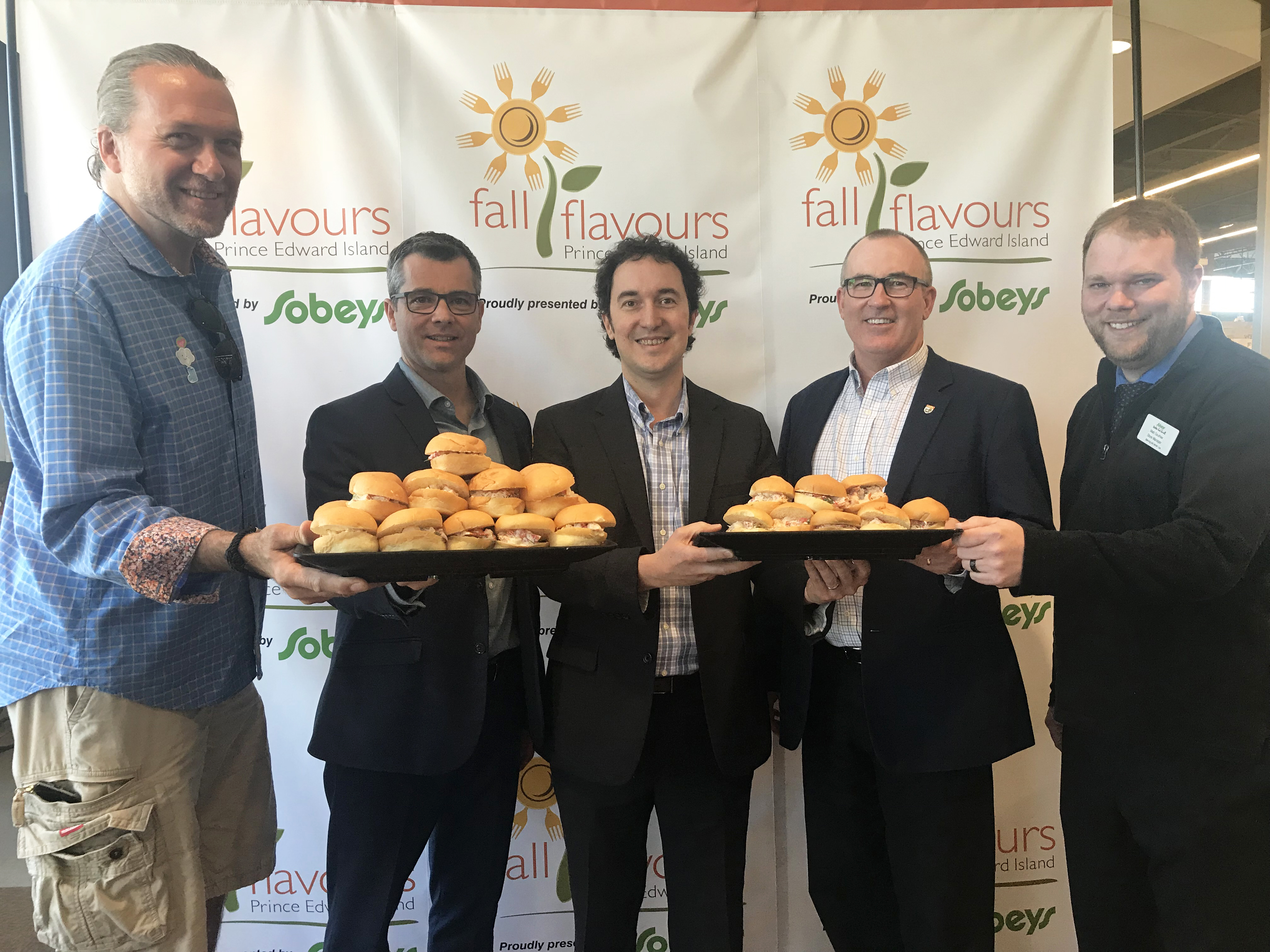 Fall Flavours is proudly presented by Sobeys. The Festival is hosted by Canada’s Food Island and is an initiative of the Food Island Partnership. Fall Flavours takes place at locations across Prince Edward Island from August 31st – September 30th, 2018.

Proudly Canadian, with headquarters in Stellarton, Nova Scotia, Sobeys has been serving the food shopping needs of Canadians since 1907. A wholly-owned subsidiary of Empire Company Limited (TSX: EMP.A), Sobeys owns or franchises approximately 1,500 stores in all 10 provinces under retail banners that include Sobeys, Safeway, IGA, Foodland, FreshCo, Thrifty Foods, and Lawton’s Drug Stores as well as more than 350 retail fuel locations. Sobeys, its franchisees and affiliates employ more than 125,000 people. More information on Sobeys Inc. can be found at www.sobeyscorporate.com.

“Prince Edward Island is a destination of choice for many reasons – one being our great food and the authentic experiences that pair well with Island cuisine,” said the Honourable Lawrence MacAulay, Minister of Agriculture and Agri-Food, on behalf of the Honourable Navdeep Bains, Minister of Innovation, Science and Economic Development and Minister responsible for the Atlantic Canada Opportunities Agency. “I am pleased to announce $155,680 to support Food Island Partnership as the group continues to encourage the development of new ideas and marketing efforts that promote PEI food products, through activities like the PEI Fall Flavours Festival.”

“Fall Flavours is one of the most well attended and enjoyed event to take place on Canada’s Food Island every year,” Economic Development and Tourism Minister Chris Palmer said. “It draws hundreds of visitors from off Island during a generally slower time of year and does an excellent job of highlighting all the delicious food available on Prince Edward Island.”

“We are so thrilled to support Fall Flavours by presenting the Taste of Coastal events and will be hosting some of these events in the Top of the Park restaurant,” said Michael MacKinnon, Managing Director, Red Shores Racetrack & Casino, on behalf of Atlantic Lottery. “Atlantic Lottery is proud to give back to Atlantic Canada by supporting festivals and events that celebrate our people and the cultural roots that make this place so special. The Fall Flavours festival promises an authentic Atlantic Canadian experience, and we are proud to be a part of something that brings the community together.”

“Canada’s Food Island is the perfect setting for these outstanding events. Incredible celebrity chefs and our talented local chefs present the authentic tastes of Prince Edward Island in locations as unique as our food,” said John Rowe, Chair of Food Island Partnership, the organizing group for Fall Flavours. “We are delighted to have Sobeys returning as Title Sponsor to the Festival. The addition of Atlantic Lottery as the festival’s Taste of Coastal Communities sponsor helps take us to new heights.” Atlantic Lottery, through Red Shores in Charlottetown, will present two new VIP Taste of Coastal Communities events, September 12th and 19th.

“Prince Edward Island is a great big green farm floating in the deep blue sea, surrounded by white sandy beaches and overflowing with authentic food stories and flavours,” said Chef Michael Smith. “We are one of the world’s most authentic culinary destinations.”